Meat between the buns

Burger joints are cropping all over the Metro, with their own versions of patties, dressings and signature bread. Some are banking on the American diner theme, or going for broke with the artery clogging Double bacon cheeseburger. Whichever the case may be, it's the packaging that counts. As one dear one told me 'The medium is the message'. So to wrap that juicy delicious ground sirloin patty in a mediocre bun that taste like card board would be a travesty among burger aficionados, pretentious included.
So with the clattering of bowls and cranking up the oven, a formula must be made on what would make the perfect bun. I am not a baker, nor do I aspire to be one, but the bun is a versatile component that a creation would have to apply to a broad spectrum, yet make it one's own. 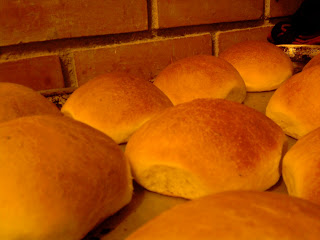 In a small sauce pan, combine milk, water and butter. Heat mixture up to 50C, and then set aside
In another bowl, combine flour, sugar, salt oregano and yeast
Mix one third of the flour mixture into the milk mixture, then stir to distribute
Gradually add the rest of the flour by thirds
Add the egg, then mix to form a ball
Transfer ball from bowl to a clean surface and knead for 8-10 minutes until smooth and elastic
Divide equally into 12 balls, about 100g each
Roll into smooth balls and transfer to a greased baking pan
Let rise 45-60 minutes, until doubled
Preheat oven to 400F/200C
Bake buns 12-15 minutes until golden brown
Let cool over a cooling rack

Now, what meat can we put in between those buns?

P.S. Hot dog buns can be made with same recipe, just form 8 cylinders
Posted by Unknown at 17:28 No comments: Links to this post

Baguette in the morning

Sift together flour and salt into a bowl
In a another bowl, mix water and yeast annd let stand until creamy, about 7 minutes
Mix half of the flour mixture into the yeast. Distribute until all flour has moistened.
Slowly add the rest of the flour
Knead 10 minutes on a lightly floured surface until smooth and elastic, about ten minutes
Place in bowl, cover with a damp kitchen towel, and let rise until doubled, about one hour
Preheat oven to 450F
Punch dough down, and knead for 2 more minutes.
Divide dough into three
Roll into baguettes and place on a tray
Brush with egg white, and let rise until doubled, about 30 minutes
Place a small bowl of water in the oven.
Bake baguette for 25 minutes until golden. Remove bowl of water 15 minutes into the baking time.
Serve warm and sinfully crusty with butter and preserves.

What led to this? What happens after breakfast?
Posted by Unknown at 14:40 Links to this post