The heat in my loins, and then some

A recipe for pork loin stared at me in the face after having lost and found a classic tomato chutney recipe in my scribe notebook scribbled ages ago. Rich red tomato chutney, a sensory war torn between sour and sweet, tartness and richness, tempered with balsamic vinegar and dark brown sugar. Not a jam, but having the same sinfulness. To match it with an equally decadent cut of pork, well, just seems right. Slices of moist loin with a crispy crust, tender almost-there fat, the fork making the knife feel neglected and out of place. Sage and basil and thyme dancing in wisps close to the nose, just teasing, casting a glimpse of what is to tease the palate. 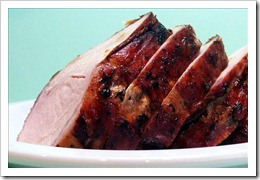 Preheat oven to 375F
Season pork loin with salt and pepper
Place carrots, onions, celery, bay leaf in roasting pan
Place seasoned pork loin on top
In a bowl, combine honey, oil, orange juice and herbs
Pour over pork loin
Add stock
Place in oven and bake 45 minutes to an hour or until internal temperature reaches 150F
Ladle liquid over pork loin to prevent drying out and infuse the flavor
While that goes on, prepare the chutney

30 ml olive oil
100 gr white onion, chopped
6 cloves garlic, chopped
60 gr brown sugar
60 ml  Modena Balsamic Vinegar
10 gr minced fresh ginger (easier to mince with a grater)
1/4 tsp crushed pepper flakes
300 gr peeled tomatoes
30 gr fresh basil, chopped
Salt and pepper to taste
Heat oil on pan
Sauté onions and garlic until tender and translucent, about 4 minutes
Lower heat
Stir in vinegar, ginger, sugar and pepper flakes
Let simmer until slightly thick, about 3 minutes
Add in crushed peeled tomatoes
Bring to boil, then lower heat to simmer
Stir occasionally, reducing to half the quantity and thick enough to be not a sauce
Stir in basil
Season with salt and pepper
Take out pork loin and let rest for 10 minutes
Strain liquid from roasting pan into a sauce pan and reduce to half until slightly thick
Slice pork loin and place on serving platter
Drizzle reduced sauce over the slices
Spoon a good quantity of chutney on the side
So tell me. After the dinner. After the slices. After the obligatory espresso. How do you feel?
Posted by Unknown at 09:52 Links to this post 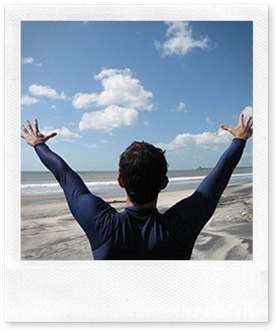 I just found this really funny. Life simplified. With all the milestones. Summarized into one silly joke. Can anyone really react to this? Can we relate?

On the first day God created the dog. God said, "Sit all day by the door of your house and bark at anyone who comes in or walks past. I will give you a life span of twenty years." The dog said, "That's too long to be barking. Give me ten years and I'll give you back the other ten."
So God agreed.
On the second day God created the monkey. God said, "Entertain people, do monkey tricks and make them laugh. I'll give you a twenty-year life span." The monkey said, "Monkey tricks for twenty years? I don't think so. Dog gave you back ten, so that's what I'll do too, okay?"
And God agreed.
On the third day God created the cow. "You must go to the field with the farmer all day long and suffer under the sun, have calves, and give milk to support the farmer. I will give you a life span of sixty years."
The cow said, "That's kind of a tough life you want me to live for sixty years. Let me have twenty and I'll give back the other forty."
And God agreed again.
On the fourth day God created man. God said, "Eat, sleep, play, marry and enjoy your life. I'll give you twenty years."
Man said, "What? Only twenty years? Tell you what, I'll take my twenty, and the forty the cow gave back, and the ten the monkey gave back, and the ten the dog gave back, that makes eighty, okay?"
Okay," said God, "You've got a deal."
So that is why the first twenty years we eat, sleep, play, and enjoy ourselves; the next forty years we slave in the sun to support our family; the next ten years we do monkey tricks to entertain the grandchildren; and the last ten years we sit on the front porch and bark at everyone.
Life has now been explained to you. 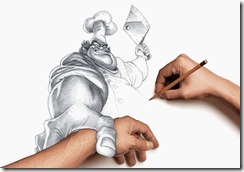 More culinary quotes that I found. As food undoubtedly inspires, the spirit that is borne is captured in inane, provoking, ponderous, insane or straight thoughts and words that has seasoned our lives through thousands of years.

"…the key dietary messages are stunningly simple: Eat less, move more, eat more fruits and vegetables, and don't eat too much junk food. It's no more complicated than that."
Marion Nestle

"...what is your host's purpose in having a party? Surely not for you to enjoy yourself; if that were their sole purpose they'd have simply sent champagne and women over to your place by taxi."
P. J. O'Rourke

"A Bearnaise sauce is simply an egg yolk, a shallot, a little tarragon vinegar, and butter, but it takes years of practice for the result to be perfect."
Fernand Point

"A bottle of wine contains more philosophy than all the books in the world."
Louis Pasteur

"A complete lack of caution is perhaps one of the true signs of a real gourmet: he has no need for it, being filled as he is with a God-given and intelligently self-cultivated sense of gastronomical freedom."
M.F.K. Fisher

"A crust eaten in peace is better than a banquet partaken in anxiety."
Aesop

"A cup of coffee - real coffee - home-browned, home ground, home made, that comes to you dark as a hazel-eye, but changes to a golden bronze as you temper it with cream that never cheated, but was real cream from its birth, thick, tenderly yellow, perfectly sweet, neither lumpy nor frothing on the Java: such a cup of coffee is a match for twenty blue devils and will exorcise them all."
Henry Ward Beecher

"A daydream is a meal at which images are eaten. Some of us are gourmets, some gourmands, and a good many take their images precooked out of a can and swallow them down whole, absent-mindedly and with little relish."
W. H. Auden

"A good dinner is of great importance to good talk. One cannot think well, love well, sleep well, if one has not dined well."
Virginia Woolf

"A gourmet is just a glutton with brains."
Philip W. Haberman, Jr.

"A man in the wilderness asked me, How many strawberries grow in the sea? I answered him, as I thought good, As many as red herrings grow in the wood."
Mother Goose

"It takes a lot of dough to make the upper crust"
Alfred E. Newman

"Mincing your words makes it easier if you have to eat them later."
Franklin P. Jones

"Salt is the policeman of taste: It keeps the various flavors of a dish in order and restrains the stronger from tyrannizing over the weaker."
Malcolm De Chezal

Give me books, French wine, fruit, fine weather and a little music out of doors, played by somebody I do not know.
John Keat

A gourmet who thinks of calories is like a tart who looks at her watch.
James Beard


In order to make an apple pie from scratch, you must first create the universe.
Carl Sagan, Cosmos

I find a recipe is only a theme, which an intelligent cook can play each time with a variation.
Madame Benoit

Do you have a thought to add?

The coming of a CSN Stores Review

Guess what! It is interesting. I have been asked to do a review for CSN Stores! That’s right! CSN stores has over a million items from hundreds of stores, making it one of the top retailers in the U.S. Items include dining room tables, cookware, and great kitchen gift ideas. And I get to review an item. I am chuffed!

The Website is pretty intuitive, and searching for an item I found easy as A-B-C. Scouring through the Kitchen accessories I found a great Wrought Iron Pot Rack, Alessi Kitchen Tool Rack and KitchenAid Cookware. Makes me break out in a sweat and just shop like crazy.

So I get to review something from the catalog. Something different. Something great. Something I am sure will pique your interest.Watch out for it!

Email ThisBlogThis!Share to TwitterShare to FacebookShare to Pinterest
Labels: Reviews

The secret of life

There really is no secret. It is anything that makes up your existence, creates memories, and keeps the demons at bay.
Crunchy outside, fluffy inside pancakes
Good cup of coffee (preferably a cup of Illy)
The absence of cellphones among friends at the breakfast table
A crisp white shirt on blue jeans
Purring cat on the lap
A liter of ice cold coke on a hot day
A well seasoned iron skillet
Eight straight hours of sleep
The weekend market
Snail Mail from a long lost friend
Silence at sunset
Fresh batteries in the remote control
Top Chef DVD marathon with a doobie
Waking up late
Sleeping in early
A bottle of Mavro Daphne in the afternoon
Having mindless sex on a rainy afternoon
Skinny dipping at the beach
Disconnected from Facebook, Twitter, LinkedIn, etc. for one whole day
I pause, and think and ponder. What else makes life what it is. What can I remember to be a unique experience. Then I lay down, stare into the ceiling. And then dream.
Meeting old friends, making new ones
Blowing out birthday candles
Crying because you couldn't help it
Crying because you could
Falling in love
Falling out
A fluffy pillow
Real coke, real sugar, real butter
Being wide awake before sunrise
Laughing
Laughing till it hurts
People watching, and making stories as they pass by
Recipes in metric measurements rather than empirical values
Flying in an airplane
Jump out of a plane or off a cliff
Playing hopscotch and hide n' seek with the kids
Driving a sailboat
Soft wet kisses
A good book and hot chocolate
Indifference to jealousies and negative feelings
Going to school
Getting out of school
A wallet full of money
Having something to write about
Having nothing to write about
Warm chocolate chip oatmeal cookies
A delicious home cooked meal
Parmiggiano reggiano
Enjoying what you eat. Eating what you enjoy
Chocolate balsamic vinegar
POPSwatch on your kitchen sleeve
Seared Foie Gras
Grandma's cooking
I am sure I missed something. What's the secret of your life?
Posted by Unknown at 08:53 Links to this post